I’ve been asked many times to define what camp means to me. Every single time I’m asked I use the same words:  home and family.  But to me those definitions are different than the typical textbook definitions.

Home. What is the definition of the word home? A home is a place where one lives permanently, especially as a member of a family or household. I disagree with that definition and you’ll find out why through my story. My name is Brandon Brichetto and I’ve been involved with Camp Susan Curtis since 2005, a total of eleven years with hopefully many more to come. I was ten years old when I was invited to attend Camp Susan Curtis. I was called into the Guidance Counselor’s office and was asked if I wanted to attend Summer Camp. I was super excited on the outside but on the inside I was afraid. I was a shy kid in school, I had very few friends and I lived on a busy road so I spent a lot of time at my house. I didn’t know why I was invited. Not once until I was older did I know that Camp Susan Curtis was for economically disadvantaged youth. I remember the first day of camp pretty clearly; I had those butterflies in my stomach, nervous about being away from parents and away from my comfort zone.

Brandon (center) as a CIT.

I remember getting out of my parents car and walking through the camp gate and finding my way to Cabin 4. When I arrived a counselor awaited me on the porch and his warm welcoming hello and smile made my nerves relax. One of my memories during that first summer was when my cabin went on our overnight up Allen Mountain. I remember my whole cabin was in one tent and one of the boys started to cry and say he was homesick and then like clockwork each one of my fellow cabin mates started crying and getting out of the tent until everyone in the cabin was crying on top of the mountain. Yes, even I was crying. The counselors went around to each and every one of us asking what’s wrong and how they could help. When they finally arrived at me, I stood up and said, “I’m not homesick, I just have a scrape on the back of my knee that really hurts.” Looking back at this memory I laugh and wonder why I was not homesick. Today, I realize that it was because I was home.  At the last campfire of that first summer, I was given the footprint award for the camper that emulated the spirit of Camp. I was hooked. Each summer, I would walk through the gate at the end of the camp road and as soon as I passed through nothing would matter in the outside world. I was able to be a kid with no worries other than what I wanted to do for free choice that day. It was like there was a bubble around camp protecting me from the outside world.

I was invited to participate in three summers of Leader-in Training and one summer of Counselor in Training. During these four years, I flourished. I grew out of my shyness and into the leader I am today. My peers started to look at me as a strong leader and would look to me for solutions and guidance through the everyday obstacles that we were given. By the end of the leadership development programs my self-confidence was sky high and nothing was going to stop me from achieving my goals.

During my staff years, I started as a leadership development counselor and went on to move back to traditional camp, mini maintenance man, R.O.C.K Director, and sometimes Murse. During my years as staff, I grew a lot as a person. You’d be surprised at how much working with youth can teach you about yourself.  [PHOTO BRANDON & CHRISTOPHER] 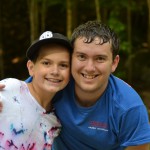 Brandon and his brother.

My next definition is Family. How is it traditionally defined? A family is a group consisting of parents and children living together in a household. That did not fit what I knew. I grew up in a traditional family; I had a Mother, Father, and two siblings-an older sister and a younger brother. I lived in Westbrook and graduated in the class of 2012 from Westbrook High School. My family on paper looked like your average family. We weren’t, we were far from it. My parents did a great job at hiding things. They hid that fact that we were poor, they hid the drugs, and they hid the violence. Growing up you are so naïve. I didn’t start to realize these things until I was in my teenage years. It’s a huge wake up call, when you have no power, no water, and no food in the fridge or the first time you call 911 because you’re afraid your parents are going to kill each other or even the first time you struggle to wake a parent up but they are too out of it to get you to school after you missed the bus.

I remember in High school I would purposely miss the bus just because I knew I wouldn’t get a ride to school. I didn’t want to be in school. I was never challenged and my teachers wouldn’t challenge me because I wouldn’t show up. It was a never-ending cycle. I was embarrassed to go to school, my clothes smelt like cigarette smoke, I had long tangled hair, I secluded myself because I didn’t want anyone getting close or to know what I had to deal with on a daily basis. I hid in my room, my “safe area”. When I was in there nothing could hurt me. Just like when I was at camp. The summer after my sophomore year, I was at camp and we were having our nightly summit meeting on the Bald Face Mountain trail. Summit is our time at night that we all get together as a cabin and discuss the day with a topic question. That night’s topic question was “Where do you see yourself in 5 years?” I sat down and thought really hard and from there on I decided I wanted to help people, I wanted to make a difference in peoples lives. I wanted to become a firefighter and I wanted to go to college. I never thought about going to college.  College was not something my family did but at the moment I wanted change.

The first year in the public safety program at Westbrook High, I put in over 200 hours of community service and was recognized for having the most hours the program has ever seen. I was starting to put my life together. I joined the Gorham Fire Department in November of 2010 and set my sights on becoming a career firefighter/paramedic. I became the Junior Fire Lieutenant that December and served in the position until I graduated in 2012.

I started to bring all the skills I was learning at camp back into the real world. It was not until after my counselor-in-training summer that I felt like I was on top of the world. At age 16, I started my firefighter training at Presumpscot Valley Fire Academy. I was one of the youngest to ever attend. While there, I was taking my EMT course and a full load of classes for my senior year. When I graduated from WRVC, I was recognized as the Public Safety Student of the Program.

I was accepted into the fire science program at Southern Maine Community College. Sadly, I had to take the summer off from camp because I needed to save up enough money to buy a car so I could have transportation to college. I worked at two different jobs just to barely have enough to get the car. I didn’t give up.  Nothing was going to stop me from my dream. I started college and moved into the fire station. I spent one semester in fire science before realizing that I really enjoyed the medical field. 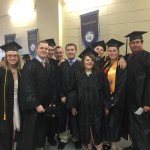 Brandon (back center) graduating with his certificate in Paramedicine. 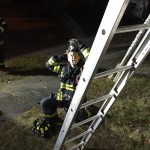 Brandon on the job.

I switched to Paramedicine graduating in 2015 and walked across the stage with my paramedic license in hand. I was starting to make my dreams come true.  I was the youngest paramedic in the State of Maine at the age of 20. I was now faced with a tough decision of either continuing my education and going to medical school or finding a job in the fire service. I decided I could do both, I am studying health science at the University of Southern Maine and have a career as a full time firefighter/paramedic for the City of Westbrook.

I often ask myself why it is that some children make it through a difficult childhood relatively unscathed while others spiral into drug abuse, alcoholism, or even worse death. It’s because of places like Camp Susan Curtis. Camp Susan Curtis gives Maine youth a place where they can be children without all of the worries and barriers they have at home. Camp gives youth a safe environment to build essential life skills like decision-making, teamwork, critical thinking, and communication. Within that safe environment, youth have amazing role models to look up to and strive to be.

Home. Family. Confidence. Safety. Decision Making. What do these words mean to you? I know what they mean to me. Camp Susan Curtis has given all of these things to me. They have given me the confidence to make every life changing decision I have to do in the back of an ambulance or on a fire scene. They have given me a family that I know would do anything to help me through anything and everything. The biggest thing they have given me is a place to call home. No matter where I go in life, if it’s a million miles away or even right down that beautiful camp road, Camp Susan Curtis will always be my home and you guys will always be my family.